Nero, aged 17, is carried in a litter with his mother, Agrippina, into a busy, opulent scene for his coronation, borne by slaves. The relationship between mother and son, as Suetonius reports, was thought to be incestuous. Agrippina had poisoned the outgoing emperor Claudius, her second husband, with mushrooms, having connived previously to get him to name Nero, her son by a previous marriage, as successor. Both mother and son are “expectant” for Nero’s imminent coronation.

My darling boy, with a smile, begin!
Look at me, your mother! If you won’t spread
Your lips in joy for me, offer your chin,
No god shares his feast, no goddess her bed.

Nero smiles, kissing Agrippina on the cheek, neck, and bosom, boyishly, and a bit too over-fondly: Mother!

Agrippina lets the bodice of her dress fall loose and sings Aeschylus,
Choephoroe 896-898:

Honor, my child, my son,
This breast at which you nursed.
Do not go; be not done!
Slumbering there a spell,
Squeeze out of me with pursed
Lips milk to make you well.

Nero buries his face in Agrippina’s bosom: Mother, I do; and I will!

Nero steps out of the litter, arm-in-arm with Agrippina, and takes his seat on the dais. The Senate hails him as Imperator. Seneca is at his left offering advice; Agrippina on the right to assert her place. The Chorus, split between male and female voices, represents the interests of the Senate and the Muses.

The Divine Claudius is dead!
We hail Nero, son of Agrippina, as Emperor!

The last age of the Sibyl’s song has come,
The great order of ages born anigh,
Virgin Justice returns to earth; some
New race, and Saturn’s reign, falls from on high!

Agrippina, to Nero: You will rule the world! The ages will rejoice in you—my love!

Seneca, solemnly, sings to Nero from his De Clementia 1.7:

The risk the Roman people faced was great, while it was unknown what course your noble
gifts would take. But as it stands, you can count on prayers from the State: I see no risk that
some sudden self-amnesia will seize and hold you in its sway.

Too much prosperity makes men want more; and desires are never so restrained that they
disappear once attained. Ascent always grows from great to greater, . . . and men embrace
the wildest hopes once they obtain what they never, ever dreamt.

Today all your subjects feel inspired to say they are fortunate, and that nothing further could
be added to these blessings—except they endure . . .

As the acclamation subsides, Nero, accompanied by the harp, announces his
platform as emperor (Archilochus fragments 1 and 2):

I am the servant of the Muse and Mars:
We wield the spear, yet the Muses’ gift is also ours.

Nero takes a symbolic sip from a chalice and tosses it away.

Agrippina, beside herself: Drink it down to the lees, my son!

Linus and Orpheus of Thrace
Will not out-sing me in an air,
Though his mother, Calliope,
Inspire the one with her embrace,
And Linus Apollo, the fair.
Even Pan, if he vied with me,
With Arcady to judge the case;
Yea, Pan, with Arcady to bear
Judgement, would surrender to me.

Chorus, now representing the Muses (intermingled with, but invisible to, the
other characters on stage), alight near Nero and whisper in his ear Hesiod,
Works and Days 3-4 and Theogony 27-28:

By will of Zeus, men have fame.
Or they do not. They are sung
And receive in song a name.
Or are unknown to the tongue.

Chorus:
We lead men in song astray.
With lies like truth we taunt
Your kind; yet we also play
The truth, if and when we want.

Nero, archly: What is truth?

The father and the ruler
Of our humankind is War,
Who makes slaves free, free men slaves—
Some gods!—others men, no more.

Good gods! What woe is this—to kill, to rage, to take pleasure in the clink of chains and in
severing the heads of countrymen!

True happiness lies in saving lives, in summoning the many back to life from the brink of
death by acts of mercy. No ornament is more fitting for a prince on high—not trophies
stripped from a fallen foe, nor chariots stained with savage blood, nor spoils gained in war.
To save life on a universal scale shows … the power of a god; to kill en masse and without
distinction is the force of firebrands and ruin.

You are the soul of the State; the State is your body. You see, I am sure, the need for mercy:
When you spare another, you save yourself.

Nero, coyly: Caesar, then, to that degree, is merciful indeed.

Nero, my beloved son! This is the moment
For you to seize Fortune
By the hair and stop her in her tracks.
Today, a propitious fate
Extends to you the crown of Caesars.
To you alone I reveal what is, as yet, known
by none.

She offers Nero a large book.

Take this up and read!

Chorus: The Sibylline Books! Tolle! lege! Take it up and read!

And you shall see
And know what my mind
Contrives for your future good!

What I will sing I do not know.
Yet what I speak doth God require.
They say I am a raving liar,
Myself to ecstasy I throw.
Circe’s child, I am Sibyl, sire
Unknown. But all will thus transpire.
Thought mad no more, God’s truth I show.

Last in Aeneas’ line
A matricide shall rule,
A hissing, wicked snake
Spewing war, who, in time,
Will lay hands upon—who’ll
Kill—his kin, and then shake
Everything to decline.

Athlete, charioteer,
A murderer who dares
All—Fire from heaven’s floor
Will rain down, blood-smear,
Stormclouds, fog, gloom—night tears
The sky! The press of war
Will slaughter king and peer.

Exhausted from delivering the prophecy, the Sibyl concludes with an
anonymous poetic line transmitted in Suetonius Nero 38:

“When I am dead,” the Poet says, “may fire consume the earth.”

Nero, smartly, wildly, with wanton disregard of the Sibyl’s warnings: Nay, Sibyl, your song is false! Your last line should say: “When I am alive!”

Selections from this work-in-progress were performed with piano accompaniment at Willamette University, Salem, Oregon, on March 13, 2013. Here below is a recording of that performance, with libretto and accompanying English translation for each track. Some tracks below are followed by images of the score in draft manuscript. You can click on the image to enlarge it.

Setting: 54 CE. Upon the death of Claudius by poisoning, Nero is acclaimed emperor by a chorus comprised of the Senate and Praetorian Guard, who hail him with a litany of imperial epithets. The newly crowned emperor—17 years old—sings, holding a staff, which serves as an emblem of both his sovereignty and his self-understood calling as a singer and performer. These are Nero’s first words in the opera, which he borrows self-consciously from the Greek poet Archilochus (frags. 1 and 2), and are programmatic for the characterization of Nero throughout and for the work as a whole . . .

I am the servant of the Muse and Mars:
We wield the spear, yet the Muses’ gift is also ours.

Setting: circa 62 CE. Nero returns home late —and drunk—from the chariot races to the palace. Nero taunts his wife Octavia, they argue, he repudiates her, and, in response, Octavia sings the following Latin text (taken from the pseudo-Senecan tragedy Octavia), followed by a “lullaby” to her forlorn self from the Greek poet Alcman (frag. 89), as daybreak approaches . . .

Aurora just now filled the sky with light,
But is in retreat from the errant stars.
Now the Titanic Sun begins to rise,
His halo all aglow, to make day bright.
As for me, I surpass in woe by far
The Halcyon birds with their longing cries,
When across the waves to nest they sweep.
In songs of woe I vanquish, too, Procne
And Philomela! For my pain is worse,
Much worse, than theirs. So I am left to weep
The dawning of the day, which torments me.
Night these days to me is sweet, light a curse.

Octavia collapses on her bed and sings . . .

The world is lost in sleep:
Rivers, peaks, and headlands,
Caves, creatures—every kind
The black Earth breeds that creep
Upon her: mountain bands
Of beasts, bees, birds entwined—
And monsters in the deep. 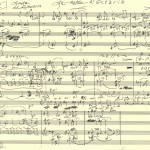 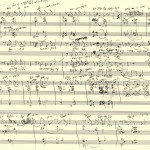 Setting: circa 58 CE. Nero and Seneca are sitting together in the palace, engaged in philosophical discussion on the traditional theme, “What is best for man?” Nero sings here a famous Athenian symposiastic song (skolion) attributed to the poet Simonides (Athen. 15.694e).

To have health is best for a mortal man;
Second, to be a handsome man in mien;
Third, to have riches, honest as one can;
And the fourth: with friends to feel young again.

Track 5: What I Say Is Love (Poppaea), from Scene 3, “Sapientia Amoris”

Setting: circa 58 CE. Poppaea Sabina, a sophisticated woman-about-town, and later, Nero’s second wife, enters the scene seeking an audience with Nero on some matter about her husband, Otho, and joins the discussion. She counters Nero and Seneca’s propositions on “What is best for man?” with Sappho frag. 16—itself a version of the symposiastic “what is best” motif—and posits the choice of Helen.

Some say the gathered host
Of men, horse, ships is worth
So much, and is (think they)
More beautiful than most
Of what one sees on earth.
But what one loves, I say,
Is best; that is my boast.

My point is amply clear
To all, to anyone:
For Helen, who did best
All her rivals in sheer
Beauty—that battle won—
Her husband, wholly blest,
She left behind to steer
A course by sea for Troy
And did all thought of child,
Mother, father destroy. 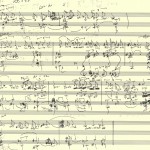 Setting: circa 58 CE. Nero is impressed with Poppaea’s learning by aptly quoting Sappho; also remarks on her beauty; then Nero engages her in flirtatious dialogue by quoting Catullus poem 5, which is at once a response to Seneca’s pessimistic observation from the poet Theognis [not included here] that it is better never to have been born, while at the same time affirming Poppaea’s Sapphic view. Poppaea accepts the emperor’s flirtatious overture and responds in kind, picking up lines of Catullus’ famous poem where Nero leaves off. Octavia enters the larger scene, observes and overhears the encounter. As she sees Nero flirting with Poppaea, she sings (offstage, but still visible to the audience) as a soliloquy—but interleaved musically with the erotic duet of Nero and Poppaea—Catullus poem 51, which is a transposition in Latin of Sappho’s poem 31 about jealousy. The scene concludes with Octavia alone onstage singing yet another Sappho poem—fragment 1, a desperate invocation to Aphrodite.

Nero:
Let us live, my Sapphic Muse, and let us love …

Poppaea:
And count the talk of men too old
As worth a single penny!

Nero:
Suns can set and rise again
But for us, once the brief light of day has died,
All that’s left is one never-ending night of sleep.

Octavia:
Oh, this sight steals away all my senses—wretched me!
The moment I caught sight of you, Poppaea,
No voice was left in my mouth to speak …

Nero:
Then, when we have compiled thousands,
We will mix them up, so as not to know the tally,
And so no malcontent can harm us with envy …

Octavia:
My tongue is numb, a slender flame
Is running down my legs,
My ears are ringing all on their own,
My eyes are covered in night.

Nero and Poppaea:
When he learns how many kisses we’ve had!

Deathless Aphrodite,
On your intricate throne,
Weaver of wiles, child
Of Zeus, I beg: crush not
My heart, my Queen, with pain!

Come once more now and free
Me from my cares; my own
Desires give to me while
My heart is strung so taut!